The Rise and Decline of Cannabis Prohibition 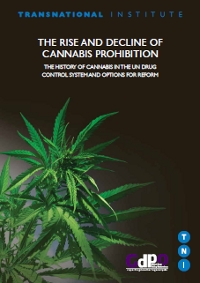 The cannabis plant has been used for spiritual, medicinal and recreational purposes since the early days of civilization. In this report the Transnational Institute and the Global Drug Policy Observatory describe in detail the history of international control and how cannabis was included in the current UN drug control system. Cannabis was condemned by the 1961 Single Convention on Narcotic Drugs as a psychoactive drug with “particularly dangerous properties” and hardly any therapeutic value.

Ever since, an increasing number of countries have shown discomfort with the treaty regime’s strictures through soft defections, stretching its legal flexibility to sometimes questionable limits. Today’s political reality of regulated cannabis markets in Uruguay, Washington and Colorado operating at odds with the UN conventions puts the discussion about options for reform of the global drug control regime on the table. Now that the cracks in the Vienna consensus have reached the point of treaty breach, this discussion is no longer a reformist fantasy. Easy options, however, do not exist; they all entail procedural complications and political obstacles. A coordinated initiative by a group of like-minded countries agreeing to assess possible routes and deciding on a road map for the future seems the most likely scenario for moving forward.

There are good reasons to question the treaty-imposed prohibition model for cannabis control. Not only is the original inclusion of cannabis within the current framework the result of dubious procedures, but the understanding of the drug itself, the dynamics of illicit markets, and the unintended consequences of repressive drug control strategies has increased enormously. The prohibitive model has failed to have any sustained impact in reducing the market, while imposing heavy burdens upon criminal justice systems; producing profoundly negative social and public health impacts; and creating criminal markets supporting organised crime, violence and corruption.

After long accommodating various forms of deviance from its prohibitive ethos, like turning a blind eye to illicit cannabis markets, decriminalisation of possession for personal use, coffeeshops, cannabis social clubs and generous medical marijuana schemes, the regime has now reached a moment of truth. The current policy trend towards legal regulation of the cannabis market as a more promising model for protecting people’s health and safety has changed the drug policy landscape and the terms of the debate. The question facing the international community today is no longer whether or not there is a need to reassess and modernize the UN drug control system, but rather when and how to do it.

• The history of cannabis in the international drug control system (PDF - 2.8 MB)

• The INCB and cannabis: from description to condemnation (PDF - 1.6 MB)

A hardcopy of the report is availabe for purchase in our online bookstore.

The report was launched on March 18, 2014, at an official side event at the Commission on Narcotic Drugs (CND), Monitoring and evaluation of the new regulatory law on cannabis in Uruguay, jointly organised with the government of Uruguay, IDPC and the Washing­ton Office on Latin America (WOLA).

• The Transnational Institute interviewed by The Hash Marihuana & Hemp Museum

Since 1996, the TNI Drugs & Democracy programme has been analysing the trends in the illegal drugs market and in drug policies globally. The programme has gained a reputation worldwide as one of the leading international drug policy research institutes and a serious critical watchdog of UN drug control institutions. TNI promotes evidence-based policies guided by the principles of harm reduction and human rights for users and producers, and seeks the reform of the current out-dated UN conventions on drugs, which were inconsistent from the start and have been overtaken by new scientific insights and pragmatic policies that have proven to be more successful. For the past 18 years, the programme has maintained its focus on developments in drug policy and their implications for countries in the South. The strategic objective is to contribute to a more integrated and coherent policy – also at the UN level – where drugs are regarded as a cross-cutting issue within the broader development goals of poverty reduction, public health promotion, human rights protection, peace building and good governance.

National and international drug policies and programmes that privilege harsh law enforcement and punishment in an effort to eliminate the cultivation, production, trade and use of controlled substances – what has become known as the ‘war on drugs’ – are coming under increased scrutiny. The Global Drug Policy Observatory aims to promote evidence and human rights based drug policy through the comprehensive and rigorous reporting, monitoring and analysis of policy developments at national and international levels. Acting as a platform from which to reach out to and engage with broad and diverse audiences, the initiative aims to help improve the sophistication and horizons of the current policy debate among the media and elite opinion formers as well as within law enforcement and policy making communities. The Observatory engages in a range of research activities that explore not only the dynamics and implications of existing and emerging policy issues, but also the processes behind policy shifts at various levels of governance.

This report has been produced with the financial assistance of the Hash Marihuana & Hemp Museum, Amsterdam/Barcelona, the Open Society Foundations and the Drug Prevention and Information Programme (DPIP) of the European Union.
The contents of this publication are the sole responsibility of TNI and GDPO and can under no circumstances be regarded as reflecting the position of the donors.