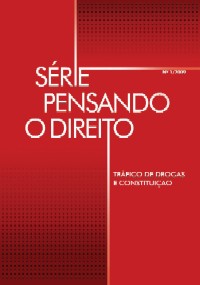 This study commissioned by the Brazilian Ministry of Justice underlines the disparity that exists between the depenalization of drug use and the increased penalization of selling drugs that resulted from the 2006 Law on Drugs. Although the fact that the use of drugs is no longer a crime is certainly progress, it seems disproportionate to establish maximum prison sentences of 5 years for the sale of very minor quantities of drugs. The study was a joint project of the Federal University of Rio de Janeiro, UFRJ, and the University of Brasília UnB that ran from March 2008 and July 2009, supported by the United Nations Development Program, UNDP.

There are approximately 70 thousand people incarcerated in Brazil for drug trafficking, the second largest contingent behind bars in the nation's corrections system, second only to aggravated robbery that put 79 thousand people in prison. Most of these traffickers are first time offenders, most were arrested when alone in possession of small quantities of drugs, and have no ties to organized crime. Nevertheless, they are sentenced to imprisonment and swell the numbers of detainees in a system already overcrowded. The 2006 law that drops prison sentencing for drug users in Brazil does not provide objective means to distinguish between users or traffickers, neither between petty, average and large scale drug traffickers. Most of those incarcerated for drug trafficking are offenders caught selling small quantities of drugs, among them drug users who sell drugs to finance their drug habits.

The sale of drugs is classified as a crime hediondo (or 'heinous' crime, a category that includes murder, rape, terrorism and torture, among other offenses) under Brazilian legislation. This means it is worse than theft. The study covered 750 cases processed between October 7, 2006 and May 31, 2008. Of those arrested for drug dealing, 66.4% had no prior criminal record; 91.9% were caught in the act; 60.8% were acting alone, that means not associated with any criminal groups; 14.1% were carrying a weapon and 83.9% were male. Furthermore, the research reveales that 58% of those arrested for this crime were sentenced to five years of prison. In many cases the maximum sentence was awarded more because of the judge’s personal prejudice than an actual justification for doing so. In most cases the accused is stigmatized for living in a favela (slum) and it’s assumed that he is involved with a criminal group that is active in that area.

In Brazil judges believe they are determining how offenders are entering the justice system, but this is really done firstly by the police. Judges tend to accept the choice made by police officers, (whether for example, an offender is charged with drug use or trafficking) and that determines whether a case goes to special courts or to the criminal system. In Rio, police arrests on drug charges are circumstantial, they are not based on investigation.

Luciana Boiteux, the study coordinator and a member of the Deparment of Law at the UFRJ, believes there is a need for solutions in drug policy that are more realistic, more humane and less based on penal justice. "When we think of controlling drugs we think it is done through the penal system – repression, police and courts of law," said Boiteux. In her view however, the penal system is "inhuman, irrational and inefficient", in her view alternative sentencing would be appropriate for petty drug traffickers.