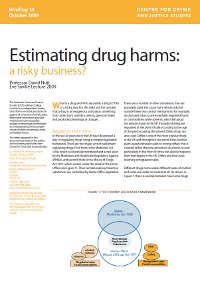 No one is suggesting that drugs are not harmful. The critical question is one of scale and degree. We need a full and open discussion of the evidence and a mature debate about what the drug laws are for - and whether they doing their job? In `Estimating drug harms: a risky business', Professor David Nutt, of Imperial College London argues that the relative harms of legal drugs such as alcohol and tobacco are greater than those of a number of illegal drugs, including cannabis, LSD and ecstasy.

What is a drug, and who says what a drug is? This is a tricky area. Different drugs come under different areas of control and some are under no control at all. In the last 40 years we in the UK have developed a way of regulating drugs using a complex legislative framework. The Misuse of Drugs Act essentially divides drugs into three classes: A, B and C.

The thinking behind this Act was to try to produce a system of relativebased harm, so that drugs could be scaled against each other and then put into one of the three classes that controlled penalties. The idea was that this would be a fl exible system: as evidence of greater or lesser harm emerged, drugs could be moved up and down the scale. That was the original intention, but the Act has become rather ossifi ed since then, and there has been very little movement, and especially very little downward movement.

Professor Nutt proposes a 'drug harm ranking', which compares the harms caused by legal as well as illegal drugs. Alcohol ranks as the fifth most harmful drug after heroin, cocaine, barbiturates and methadone. Tobacco is ranked ninth. Cannabis, LSD and ecstasy, while harmful, are ranked lower at 11, 14 and 18 respectively. Professor Nutt argues that simply focussing on the harms caused by illegal drugs, without assessing them against those of drugs such as alcohol and tobacco, results in an `isolated and arbitrary' debate about relative drug harms.

Professor Nutt argues strongly in favour of an evidence-based approach to drugs classification policy and criticises the 'precautionary principle', used by the former Home Secretary Jackie Smith to justify her decision to reclassify cannabis from a class C to a class B drug. By erring on the side of caution, Professor Nutt argues, politicians `distort' and `devalue' research evidence. 'This leads us to a position where people really don't know what the evidence is', he writes.

On cannabis Professor Nutt makes clear that it is 'a harmful drug' and argues for a 'concerted public health response... to drastically reduce its use'. However, he points out that cannabis usage fell when it was reclassified from class B to class C. And he points out that there is 'a relatively small risk' of psychotic illness following cannabis use. To prevent one episode of schizophrenia, he argues, it would be necessary `to stop 5,000 men aged 20 to 25 from ever using' cannabis. On recent debates about the classification of ecstasy, in which the Advisory Council on the Misuse of Drugs (ACDM) recommended it be classified as a class B drug, Professor Nutt writes that the ACDM 'won the intellectual argument, but we obviously didn't win the decision in terms of classification'.

Professor Nutt also criticises the quality of some research evidence on drug harms. There are, he writes, `some horrific examples where some of the so-called "top" scientific journals have published poor quality research about the harms of drugs such as cannabis and ecstasy, sometimes having to retract the articles'.

Among Professor Nutt's recommendations are:

1. Stopping the 'artificial separation of alcohol and tobacco as non-drugs'. It will only be possible to assess the real harms of illicit drugs when set alongside the harms of other drugs 'that people know and use'.

2. Improving the public's general understanding of relative harms. He had previously compared the risks of taking ecstasy over the risks of horse-riding, because media reporting 'gives the impression that ecstasy is a much more dangerous drug than it is'.

3. The provision of 'more accurate and credible' information on drugs and the harms they cause. Drug classification based on the best research evidence would 'be a powerful educational tool'. Basing classification on the desire `to give messages other than those relating to relative harms... does great damager to the educational message'.