Pardon for Mules in Ecuador 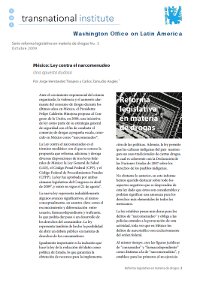 At the end of 2008, about 1,500 persons were released who were in Ecuadorian prisons sentenced for drug trafficking. The measure, known as “pardon for mules,” singled out a specific group of prisoners who were victims of indiscriminate and disproportionate legislation that was in effect for many years.

The penal system has, for many years, been under intense pressure due to abuses that occurred in confronting the phenomenon of consumption, trafficking and production of controlled substances, a dead end street that deserves critical reconsideration. The prison system has been and continues to be the dumping ground for international policies of zero tolerance concerning the phenomenon of drug trafficking. In all places where “zero tolerance” policies against drug trafficking are applied, the consequence is an increase, in many cases dramatic, of the prison population.

A pardon for small-scale traffickers, or carriers, as proposed by the Ecuadorian Government and approved by the Constitutional Assembly, is a sound and pragmatic example worthy of being applied in other countries. The pardon shows a human face to a large group of persons who have been totally abandoned by authorities. In addition, it recognizes the draconian character of the legislation on controlled substances imposed on countries in the region since the 1980s.

The measure is controversial because it concerns drug trafficking. However, in the end, it recognizes that there is a grey area when persons of humble origin with few resources are those doing the trafficking. Punishing these persons without offering them any other options is simply unjust and is disproportionate to the crime committed.

This new measure in Ecuador, however, could all go to waste if not properly followed up by new legislative reforms related to controlled substances. At the same time, as in other countries in the region, Ecuador could, with its reform proposal, inspire governments that want to free themselves from the weight of imposed legislation concerning controlled substances.