Drugs as war economy and the peace process in Colombia: dilemmas and challenges 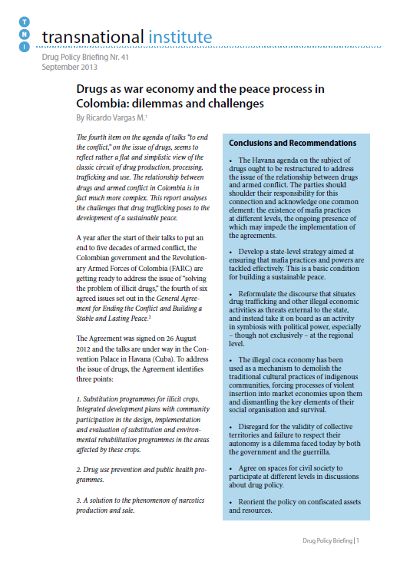 The fourth item on the agenda of talks “to end the conflict,” on the issue of drugs, seems to reflect rather a flat and simplistic view of the classic circuit of drug production, processing, trafficking and use. The relationship between drugs and armed conflict in Colombia is in fact much more complex. This report analyses the challenges that drug trafficking poses to the development of a sustainable peace.

A year after the start of their talks to put an end to five decades of armed conflict, the Colombian government and the Revolutionary Armed Forces of Colombia (FARC) are getting ready to address the issue of “solving the problem of illicit drugs,” the fourth of six agreed issues set out in the General Agreement for Ending the Conflict and Building a Stable and Lasting Peace.

The Agreement was signed on 26 August 2012 and the talks are under way in the Convention Palace in Havana (Cuba). To address the issue of drugs, the Agreement identifies three points:

1. Substitution programmes for illicit crops. Integrated development plans with community participation in the design, implementation and evaluation of substitution and environmental rehabilitation programmes in the areas affected by these crops.

3. A solution to the phenomenon of narcotics production and sale.

To outline the scope and prospects of the drugs issue in the talks, we will first analyse the methodology for the peace process and the challenges that arise from it. Second, we will assess the way in which the drugs issue is structured on the agenda for the talks. Third, we will describe some scenarios that can be predicted after the Havana talks, and finally offer some conclusions.

• The Havana agenda on the subject of drugs ought to be restructured to address the issue of the relationship between drugs and armed conflict. The parties should shoulder their responsibility for this connection and acknowledge one common element: the existence of mafia practices at different levels, the ongoing presence of which may impede the implementation of the agreements.

• Develop a state-level strategy aimed at ensuring that mafia practices and powers are tackled effectively. This is a basic condition for building a sustainable peace.

• Reformulate the discourse that situates drug trafficking and other illegal economic activities as threats external to the state, and instead take it on board as an activity in symbiosis with political power, especially – though not exclusively – at the regional level.

• The illegal coca economy has been used as a mechanism to demolish the traditional cultural practices of indigenous communities, forcing processes of violent insertion into market economies upon them and dismantling the key elements of their social organisation and survival.

• Disregard for the validity of collective territories and failure to respect their autonomy is a dilemma faced today by both the government and the guerrilla.

• Agree on spaces for civil society to participate at different levels in discussions about drug policy.